But if not, the biggest update I can announce is... 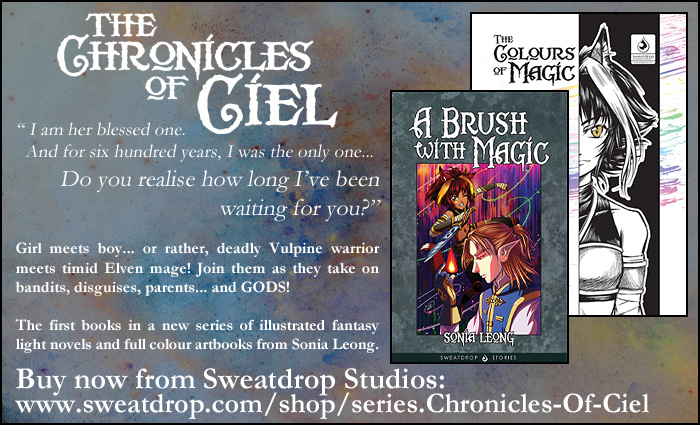 A BRUSH WITH MAGIC and THE COLOURS OF MAGIC are finally available to buy online from Amazon and Sweatdrop!
And you can also buy a special signed pack with print, exclusive to Sweatdrop only!
Buying direct from me and Sweatdrop saves us fees!
We take cards/Paypal and ship internationally!

View and buy the series at:
http://www.sweatdrop.com/shop/series.Chronicles-of-Ciel 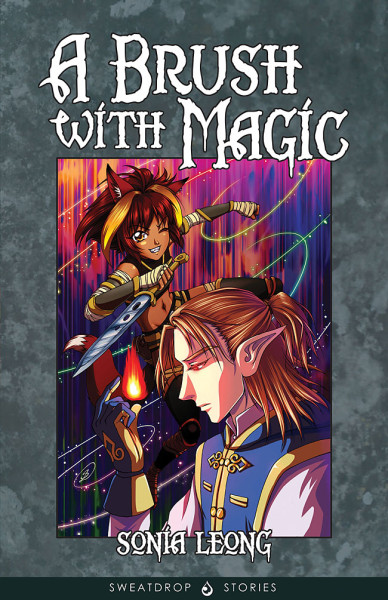 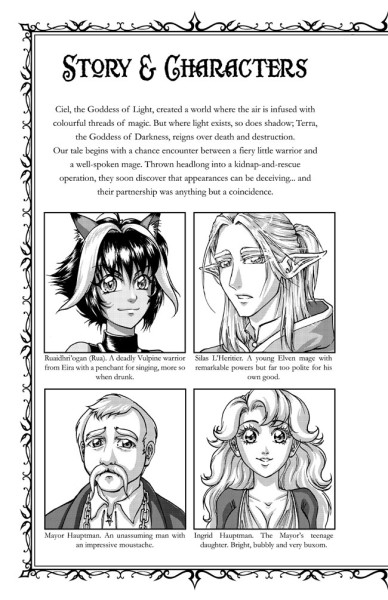 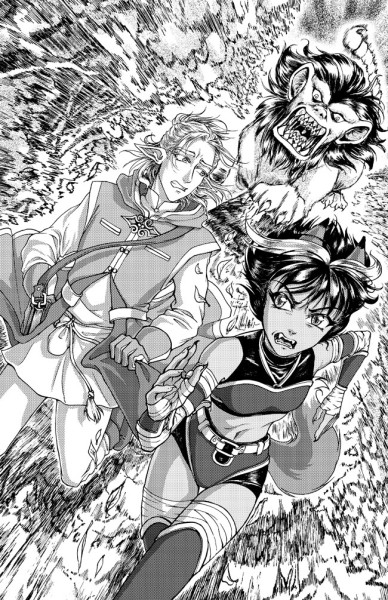 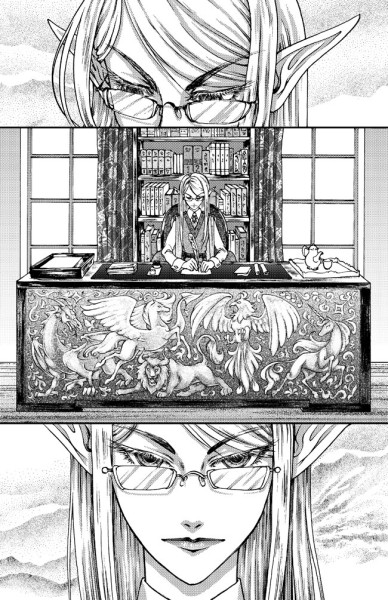 A Brush With Magic, UK£6.99
Details: 140x216mm Digest, 224pgs black/white, Teen 13+, LIGHT NOVEL
"I am her blessed one. And for six hundred years, I was the only one... Do you realise how long I've been waiting for you?"
When Rua frees Silas from some bandits, the seasoned warrior takes the student mage under her wing... partly down to him wanting to repay her kindness, but mostly because his lack of common sense meant he needed saving from himself. She soon suspects he's hiding something. That doesn't bother her. She has a secret too. She's killed thousands over the centuries and even rises from the dead to finish the job. She just tries not to do it in front of anyone she likes. But as a routine rescue operation goes from bad to worse, Silas is forced to reveal that he is the most dangerous mage in existence. And the one she has been searching for her entire life.
NEO Magazine says: 'Painting rich scenes just as effortlessly with words as she does with her pencil, Leong has created an engaging, lively and entertaining story... Interspersed with full page artwork,this is in the best tradition of Japanese light novels, mixing prose with illustrations... this short novel will have you begging for more. 4/5 STARS'
It has has well over 70 black and white illustrations throughout the book, so it's fully illustrated :) 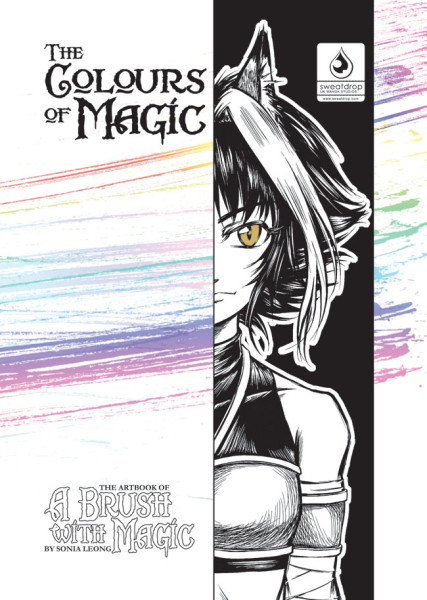 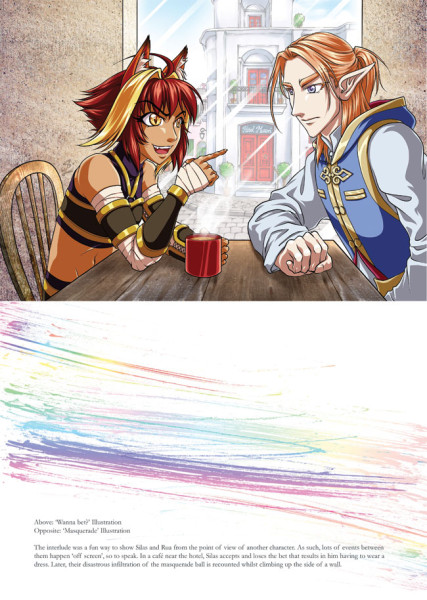 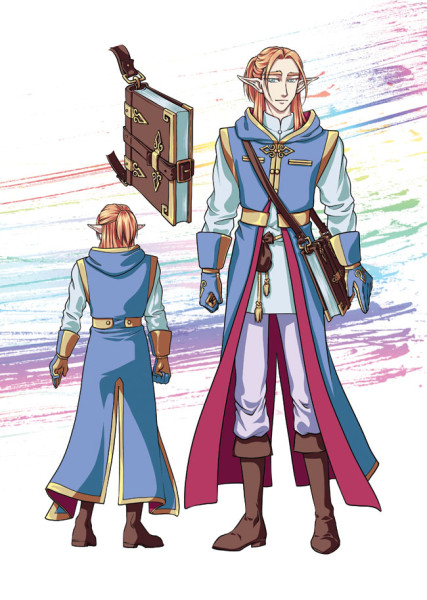 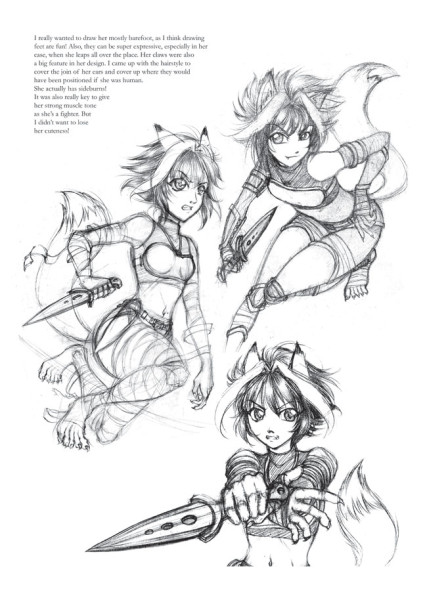 I will be going to this weekend’s MCM Expo London Comic Con! http://www.mcmcomiccon.com/london/ 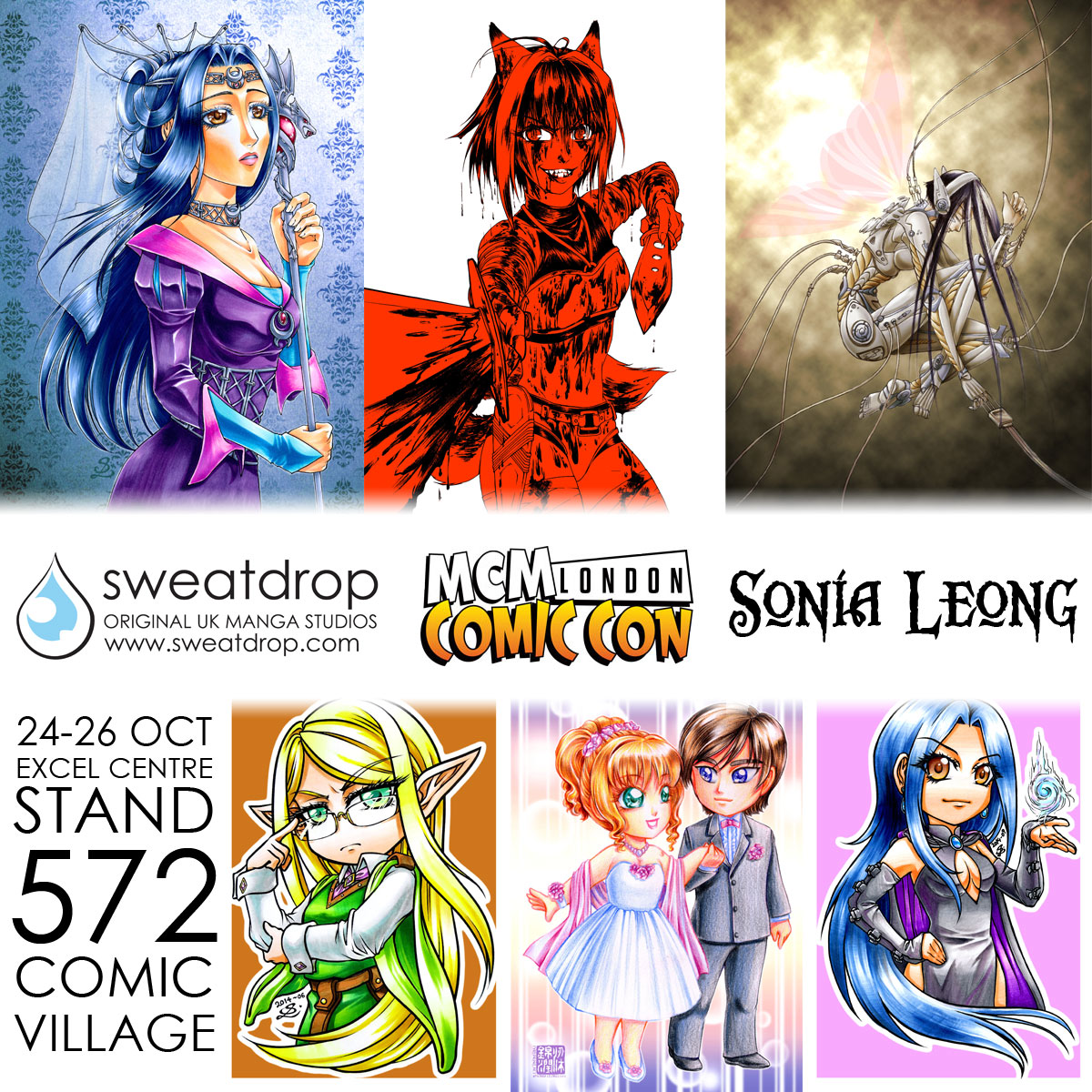 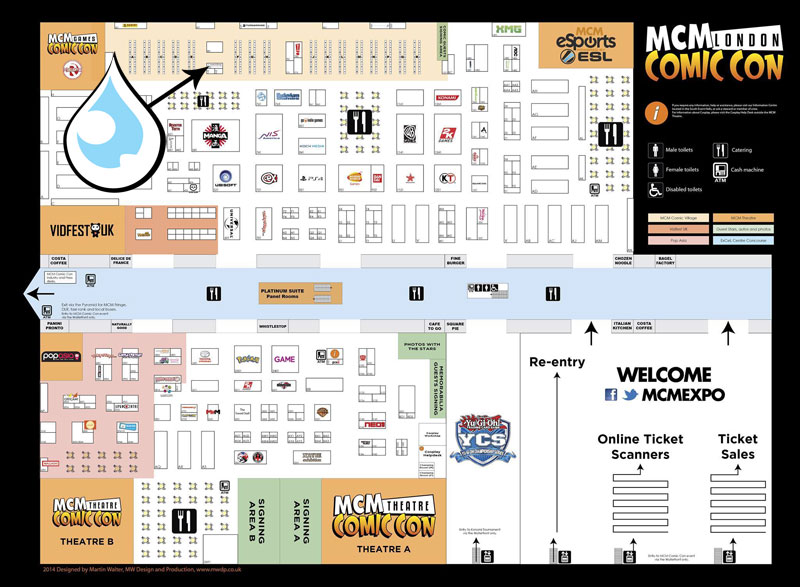 On Friday I will be at the Toyota stand, promoting the new comic I made for their 2014 Aygo car  http://blog.toyota.co.uk/toyota-aygo-manga-comic-con#.VEeWh_lRP3A

And I will also be giving some art demonstrations and talks at the NEO Magazine stand on Saturday 4.30pm and Sunday 12.15pm and 3pm as part of their 10th anniversary celebrations! http://www.neomag.co.uk/

At all other times, I will at the Sweatdrop Studios stand 572, smack dab in the middle of the Comic Village. I bring you LOTS OF NEW PRINT DESIGNS(Check out the super gory Rua dripping with blood!) and a reprint of my most popular Cyborg Butterfly design ^^

I thought I would bring my livejournal watchers up to date with what's going on with my life and everything at the moment!

If you feel left out of the loop, you can always catch up on more frequent updates from me through Tumblr, Twitter or Facebook ^^

Longtime no see, livejournal friends ^^ Like my announcement on the top of my LJ page, I have mostly moved over to Tumblr for general updates and blogging, I use Twitter for snippets and I also try to update my Facebook, but I will make more of an effort to update on here as well.

Over the past year, I've been working on several book projects which are only due to be released next year (always the way), but in the meantime, I had volume 3 of Aya Takeo printed, so you can now buy the complete set!

In fact, if you buy the complete set from me directly at any event, you get a SPECIAL DEAL! You can get all 3 books for £25 and you get a poster/set of prints included. DETAILS HERE: http://sonia-leong.tumblr.com/post/19625208953/aya-takeo-event-special-bundle-for-25

These are the new art prints from me, available to buy directly at the Sweatdrop Studios stand at the upcoming London MCM Expo this 26-28 October 2012!

You may have seen the art come in little updates over the past few months, but this is to document the newest ones that I will be having printed all in one place, for longtime fans who want to pick up my latest prints ^^ For more details about the sizes they’re in, prices and for ALL THE OTHER DESIGNS I HAVE AVAILABLE, please head to this thread on the Sweatdrop Studios Forum!

Some more general information about this upcoming London Expo:

Sweatdrop Studios will be attending the London MCM Expo, as usual! 26-28 October 2012. We will be found in the Comic Village section and will be there Friday, Saturday and Sunday!
http://www.londonexpo.com/

Head to http://www.sweatdrop.com/about-us/ to read more about us and see which comics and books we made!

Please come and say hi to us at the table - we only have 2-3 friends/spouses acting as sales assistants so if you speak to someone at the Sweatdrop stand, most likely it will be one of us, the creators behind the books ♥

We will also be offering lots of stuff aside from books!
Badges!
Keyrings!
Lucky packs/BROKEN BISCUITS! (old comics or small defects)
Original Art Prints in A5, A4 and A3!
and…

EVENT SKETCHES/COMMISSIONS!
Several of our members will be happy to do sketches for you if you ask! We are all very individual though, so our styles are very different, we may use different sizes of paper and offer different finishes (pencil, inks, coloured markers). Our prices ranges from £5 to £20 depending on the request. Always subject to availability, as our members need time off for food and shopping too


LETRASET MANGA SCHOOL SESSIONS!
Some of Sweatdrop Studio’s members will be involved in running teaching sessions for Letraset at this October’s event! They are happening over Saturday and Sunday. Keep checking their blog to find out more details, or enquire at the stand on the day and drop in! http://letrasetblog.com/
Morag Lewis will be running sessions on Manga Storytelling and Preparing For Print.
Sonia Leong will be running sessions on Head Construction & Design and Drawing Hair & Choosing Styles.
We hope to see lots of you there!!!

For a bigger / closer view at the super sharp cover image, go here: http://fav.me/d48gd8x
It's been a long time coming, but finally volume 2 of Aya♥Takeo is out in print and available to buy from the Sweatdrop Studios online shop (paypal and credit cards accepted :3) It was launched at AyaCon 2011 in August.
Please spread the word and support this book, as I need to recoup funds in order to print the last and final volume 3. And everyone wants to have a series complete, right? Right? XD So yeah! Please buy it, particularly if you have volume 1 already and want to complete the set (as I'm hoping to get volume 3 printed around Christmas).
BUY ONLINE HERE http://www.sweatdrop.com/shop/id95_Aya-Takeo-vol2
READ ONLINE HERE http://www.ayatakeo.com/
VOLUME 1 DETAILS HERE http://www.sweatdrop.com/shop/id90_Aya-Takeo-vol1
If you want me to sign it for you, you can always come along to London MCM Expo, 29-30 Oct; Doki Doki Manchester, 13 Nov; Malta Comic Con, 26-27 Nov or London Gaming Con, 3-4 Dec, I will be at those events!

Hopefully you’ll find it interesting as I really tried to tackle every part of the game in big chunks at a time (scripted my story in one go, then re-wrote in Ren’Py, then composed all the music in Sibelius in one go, then did all the artwork). Please watch it at full size to see the tits & arse- I mean, to see the artwork and the scripting clearer.

(In case you didn't recognise the music in this video, it's from my brother's acoustic duo, WithEther ♥)

Here are a selection of stills from the process to whet your appetite.

Let Me Save You! Your Faithful Companion
A Ren'Ai game (kind of) made in 48 hours by Nyaa (me, Sonia Leong)
As part of the Ludum Dare 20 "It's Dangerous To Go Alone! Take This!" challenge

You're given plenty of things in this game, including Cornelia. But whether she stays with you depends on what you do...

Size/Scope: 12 MB download, play time 5-10mins (unless you like staring at semi-naked anime babes, in which case, longer XD)

I couldn't really make any posts over the weekend as I was soooooo busy trying to get all the content for this game done. But it is done!!! The competition theme voted in was "It's Dangerous to Go Alone! Take This!". My original statement of intent was that I would only enter if I thought I could justify putting some gratuitous sexy time into my game. The good news is… I could. So I did. (Actually, it’s not so racy, I’d say it’s a 12A game).

I only downloaded Ren ‘Py 5 days ago (and Sibelius First 4 days ago) so I had to teach myself how to do this stuff pretty quick! Sincere apologies if anything seems a little clunky/buggy. You can view my entry here:
♥ http://www.ludumdare.com/compo/ludum-dare-20/?action=rate&uid=4135 ♥

I managed to get the sentence “It’s dangerous to go alone! Take this!” In there no less than FIVE TIMES XD Trust me to make the type of game that not only needs some (simple) coding, but tons of graphics, music and some semblance of a story… My husband (mjb67, you can view his entry here http://www.ludumdare.com/compo/ludum-dare-20/?action=rate&uid=4134 ) was able to submit his game after lunchtime and he just played Mass Effect 2 all evening whilst I was rushing to churn out the last graphics on mine…

Congratulations to all who managed to get their stuff in on time, commiserations for those who didn’t (but keep trying! Always!) and for those still racing to get their JAM games done, YOU CAN DO IT!!! *lovelovelove*

Screenshot featured in Retro Gamer Magazine issue #91, page 102 in the "What's Brewing?" section:
http://twitpic.com/5htn8z (thanks to Chococat for spotting and taking photo!)

Forgot to announce these!

I've been working with Hachettes Children's Books for several years on the I, Hero series of choose-your-own-adventure books, written by the Two Steves (Steve Barlow and Steve Skidmore). I'm finishing off the covers for the next two (ohohoho) but in the meantime, the last two came out fairly recently:

ALSO - due for release in a few months, Chris Bradford (of Young Samurai fame!) and his new Ninja series of books... "Ninja: First Mission" is out in June. I did the cover character art and inside illustrations:

I have been involved in a few other books, but I will leave plugging those to closer to the time :)
Collapse